Something from my past

I keep alluding to my past, and being an army brat... well one of Dad's postings was to Malaya (pre independence name as strictly speaking now it is Malaysia and a very different country to what I remember) 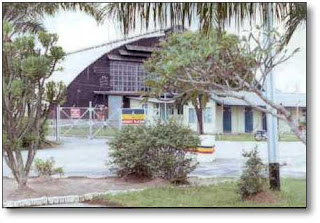 Dad left before us to take up his posting in 1966, missing England winning the World Cup (not that I remember), to fly out to Malaya via Changi airport, Singapore.

The flight was in a plane called a Vickers Viscount and took a little over 36 hours to get to Singapore with stops for refuelling in Kuwait and Ceylon (now Sri Lanka). We did the same route about 3 months after him, arriving in March 1966 to the monsoon season.

It was a culture shock to a 7 year old, my brother was two years older, to take off one day in England and land in sultry Singapore - we were so glad to have air-conditioning in the hotel, staying 3 days to see a bit of the island before catching a train to a little town called Kluang.

What I remembered most about the initial experience, was the smell of dried fish and spices and the first few months seemed to drag by and then it was as if you didn't notice it any more and the next 3 years passed by so quickly before it was time to leave.

Some of my favourite memories are :
We left Malaya, on my part with deep regret, in 1969 after 3 years and I haven't been back to visit. Half of me would like to, but is afraid that my memories will be reduced and too much will have changed for me to find where we lived.
Planted by Sage at 2:56 PM

Your memories are really evocative. Loved them!

I certainly don't miss the humidity and the mosquitos of tropic countries!