It was a beautiful evening...

After a long hot day in the office, I was in early (7.30am) as SOH dropped me off on the way to Cambridge for his induction into the new job, and even then the office felt dry and stuffy probably because of the hot weather over the weekend and the office being closed up.

A nice fresh blast of cool morning air was circulating around after I had opened up the windows to their widest, but as the morning went on the wind dropped and it got hotter and stuffier. So by 5pm I was cooked, slowly roasted in the heat of the day and was ready to get out and go home.. but then outside I found it was cooler, and pleasant so suggested an early evening walk before having our evening meal [Savoury rice and chicken breast]

SOH is new to the area, so walks are generally where I know the paths and I know a couple of nice walks about 2-5 miles in length straight from the house.. the only thing was that we didn't take a drink with us and none of these walks go anywhere near a pub :-( The walk we did was to a s wood, near where I live, the circuit was going to be about 3.5 miles long and though not flat it didn't call for walking boots, so trainers and in my case walking shoes was the order of the day. It was a nice relaxing walk, all you could hear at one point in time was the sound of birds singing as the traffic, both road and air, just seemed to disappear. Coming back, we spotted a young fox running down beside the wheat crop at a lope, presumably after some supper; we have a number of foxes around here, that may be due to the landfill site (now closed) having been an easy source of food for them. I like to see them, but I know the damage they can do - as they are wanton killers, killing for the pleasure. I was sorry not to see any hares or deer as we have plenty of those, having escaped from a stately home nearby, both roe and muntjac deer roam across the farmland around home. We arrived back home at about 7.45pm, it was nice and cool, so while we had the opportunity to, we watered the plants in the polytunnel and garden and then had our evening meal; I prefer to eat a bit sooner than we did, but the walk was good for us.

It was a great end to the day though it shortens the time we have to relax and wind down before bedtime... perhaps next time we will grab some sandwiches and have an impromtu picnic whilst waiting for the bats to come out after the evening moths and insects.

No, this isn't a picture of Reynold's wood, but another great evening at Port Stewart, Scotland. A couple of friends and I took the motor bikes up to Scotland to see a bit of the West Coast, and on this day we had ridden around the coast road from Newton Stewart, to the Mull of Galloway and ended at the end of the day at Port Stewart for an evening meal. As the sun came down, the sky lit up like fire and I took a fair amount of pictures, this one I think is the best and I have a copy framed on the wall at home. 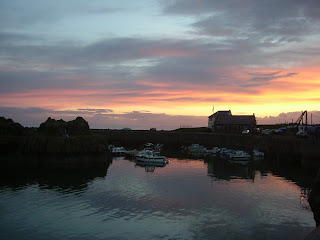 That is a lovely photo. How funny that you have just printed a picture of Scotland....so have I!!!
We must have been reading each others minds.
It sounded like you had a lovely day.