The Garden at Tre Agan

This is a view of half the garden, standing at the dining room area looking towards the stone wall which faces the back lane between us and our nearest neighbours.

It is a South facing garden, and has sunshine from morning to evening which is great in one way as it is a suntrap, but I would like to have some shading for Murphy. 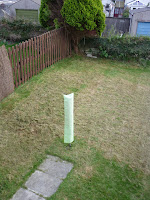 The stone wall needs clearing of all the weeds, brambles and everything else. but you can see some of the stones near to the pine tree.

The fences are 6 ft high, which provides a nice amount of privacy,  but we have also installed this brush fencing which you can see on the picture middle left. This is where the clematis are planted as they get some shade in the morning. 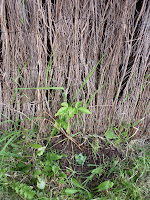 The picture on the left is one of the two clematis I have planted. Neither one of which is blooming very well, but it has been hot and dry, when they were planted and now is cooling down rapidly as we head into Autumn so I expect them to do nothing until spring time.

And that is the limit to the garden here at Tre Agan, I would love to train some apple and pear trees against the opposite fence, but equally given the softer climate here I would love to have a peach or nectarine bush.

Any and all ideas for planting welcomed.

Email ThisBlogThis!Share to TwitterShare to FacebookShare to Pinterest
Labels: Back of Beyond, Garden, Tre Agan

How lovely to have a blank canvas! I am no expert but I have learned two things, from my mistakes. Check carefully the height and spread of any plant of shrub that catches your eye, or you will spend the rest of your life cutting it back.
Dont fall into the trap of planting too close together to fill the borders, as plants seem to need a bit of elbow room to do well.
I look forward to following your progress, I'm sure you will create something very special.