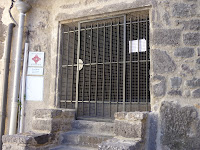 After lunch, we gently tottered (and believe me on flip flops after 5 miles in the sunshine) around the town. France closes down after lunch, sometimes not opening until 2.30pm or even 4pm. The Tourist information office was extremely helpful and we came away with lots of information on the town.

One of the places to visit was the Glaciere, which is one of the oldest parts of the town apparently built on greek remains (something I never knew) but also on top of an old volcano of which Cap'd'Agde is the basin and makes a lovely harbour.

As well as keeping ice cold, if any inhabitant had a fever, they could also be taken to the Glaciere to bring down their fever.. hmm one ice cube or two?

After a little sightseeign, we the unwise, decided to amble back to Vias Plage via the Canal du Midi (we entered by the road route and I am still not certain how we came to do that only that it was my fault as I saw the sign leading the Agde which pointed away from the Canal : sigh :) 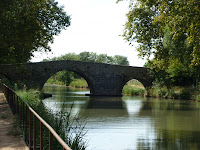 This time, we were slightly better prepared having had a nice meal, and brought some water in the town and much of the canal was shaded with some nice resting spaces and the boat traffic making gentle waves upon the water.

This picture was about half way back and led over to a small vineyard, we were too early for the main festival which was happening about a week after we were due to leave but we had enjoyed plenty of local wines including a Muscat de Frontignan which went down rather well one evening and we managed to get a bottle back as a treat for Christmas time which we are looking forward to.

The last pic is so beautiful.