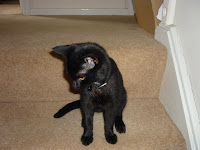 When I moved to Cornwall, originally I was going to have two cats, Piran and Saffy but when I finally got Tre Agan, Piran had gone walkabout and Saffy wasn't allowed to come on his own. So no pets until a month later when Murphy came to stay. Then 9 months later, Jasper arrived.. no there is no relationship or pregnancies involved in the occurrence.

Something was missing though, and both Jasper and Murphy were both very keen on cats, keen as in chasing them if they had half a chance.. Jasper being the worst of the two almost pulling me over.

August arrived, and with it this little chap, also called Piran as he is mainly black with a white heart patch on his chest... what else could I call him, and he is rescued from feral communities.. sadly for him, he has already had his nuts removed before I got him, but that is a good thing with a male cat. He spend the first two days hiding in the study (his den) and then introduced himself to Murphy who as usual was so laid back as to be horizontal. An introduction to Jasper was made behind the stairgate and didn't go terribly well - was I making a huge mistake?

Then on 23rd August, he casually walked downstairs, sat on the dining room table and surveyed his kingdom and two black labs - I picked him up and sat on the sofa with him and Piran fell asleep on his back... Jasper was curious but nothing more after that the household has settled down and now it looks as though they are good buddies. 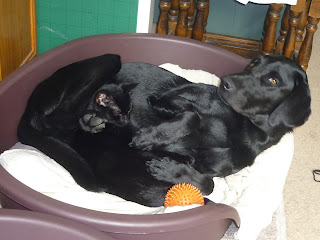 Piran loves snuggling up to the dogs bellies, Jasper is more obliging that Murphy on this, and they are often found in the same bed. Peace reigns (or Piran) at Tre Agan.

What a wonderful photo! Hamish would love a cat of his own to play with at home.

Wow! That was easy! I don't think I would get away with introducing a cat to Paddy so easily. He likes cats but couldn't eat a whole one - although he would try... ;)