You can find out how Scotland celebrates it National Day...click here But Scots across the world from Sydney to Toronto will also celebrate their heritage, with everything from a concert to a Ceilidh.

If I had to choose where I would like to be today, it would have to be the town of St Andrews, Fife.. When I worked at Balmoral I had friends who were at St Andrews University and was invited to visit them. We had a great weekend, and they took me on a tour of their town including the cathedral

Apparently St Andrews got it's name from legend, when an angel appeared to a Greek monk named St Rule or St Regulus and warned him to remove the bones of St Andrew to ' the ends of the earth ' for safe-keeping. St Rule removed a tooth, an arm bone, a kneecap and some finger bones from St Andrew's tomb in Constantinople and brought them to Scotland. Shipwrecked, he came ashore on the east coast of Fife and built a chapel there to house the relics and later removed to the Cathedral.

My weekend was marred only by a rail strike which meant travelling back on a monday afternoon rather than on the Sunday, and to while away the time I spent a few hours in lectures with my medical student friends and even understood the lecture on ketones, though I was thankful not to be asked any questions by the lecturer. 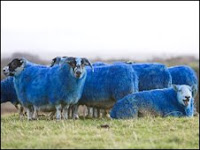 One farmer has cheered up some people by dyeing his sheep blue in celebration of the day.

Happy St Andrews day to all of those who live in Scotland, or to those who wished they did.
Planted by Sage at 5:44 AM

I do love Scotland, it is so beautiful no matter what time of year..x

Oh how I'd love to go to Scotland! ...and Ireland...and England...
Why the blue sheep? Guess I'll have to go study up on the meaning of Blue to the Scots.
Barb

Cool sheep. When I went to college one of the older students had spent the entire previous year at St. Andrews and enthralled all of us with stories and pictures (slides, back then).