Colours in the Garden 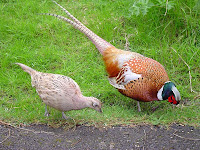 We were pleasantly surprised to see a male pheasant,who has the most wonderfully coloured plumage, in the garden this morning, feeding on the fallen pears which have not yet been picked up. The difference in colour between the male and females are quite startling. The female role would be to incubate the eggs and this grey brown colouring would fit in well, while the male is purely there for display purposes.

It cannot be said too much, that they are not the brightest of birds especially where traffic is concerned and many a body lies beside the road which gives the foxes a free meal.

Normally I would have been out there earlier in the year picking the pears up as they can attract all sorts of vermin, such as rats, but it is nice to see that some other wildlife is feeding off the produce of the garden.

Sorry, I don't have any pictures so had to download this one to give the full picture, by the time I organised myself this morning he was long gone as more people were waking up and he decided that there was not enough ground cover for him.

The snow has all gone, in fact it went yesterday morning. Leaving us with just damp rain to come home in; never a good journey on the motorway and with an accident holding us up we took longer than usual to get home.

A long weekend, but a good weekend. We got to meet up with some old friends and have a meal/drink with them and it is always good to catch up with people.
Planted by Sage at 7:52 AM

I've never seen a pheasant in person. We have some wild turkeys on our property, but I wouldn't call them pretty in any sense.

Having worked in a car accident repair shop I can tell you even though they are only birds they don't half cause some damage when cars hit them.

There are lots round near mums at the moment so I do try to avoid them.

I am also probably not going to be very popular when I say I used to go bush beating in the shooting season too....but hey I am a country girl and I didn't know any different..x

Pheasants may not be too bright but as you noted the evolutionary importance of their colouring is facinating. They have evolved to survive in an environment totally befreft of cars which have only been around a a century or so. In comparison the domestic cat has been 'domesticated' for a mere two thousand years which is why it still demonstrates a lot of wild instinct. Two thousand years is not enough time to breed out the hunter killer instincts.

Pheasants aren't very common in my area; I've never seen a wild one.

We have sooo many Pheasants here! The area is know for them and hunters amass this area during the season. (they are NOT allowed to hunt on our property!) I think they are magnificent! There is one old boy who seems to know he is safe here, as we see him throughout the summer. He has a limp, so I'm amazed he hasn't fallen prey to coyotes or hawks.
Their colors are beatufiful!
~Hugs from across the oceans~
Barb